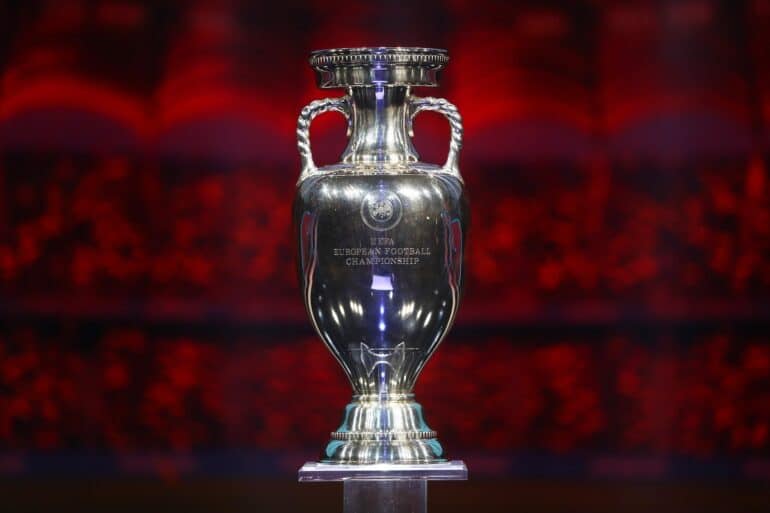 For Euro 2020 Trophy Tour- the Henri Delaunay Trophy is visiting all 11 UEFA EURO 2020 host cities ahead of the tournament.

With the countdown to UEFA EURO 2020 heating up, the legendary Henri Delaunay Trophy has set out on a journey to all 11 host cities.

The trophy tour, which will see the trophy visit every UEFA EURO 2020 host city while fans engage in online activities organized by UEFA, its partners, and the cities themselves, has already visited Rome and Bucharest.

Because of COVID’s continuing limitations, the trophy tour is mostly a digital activation this time, with no on-site events for supporters but plenty of opportunities to reach fans on the stakeholders’ social media platforms.

The trophy paid a visit to Rome last week, stopping at the Colosseum and the Terrazza del Pincio, where UEFA EURO 2000 finalist Demetrio Albertini provided local information and assistance. Then, on April 25, it was off to Bucharest, where it stopped at Piața Constituției before finishing at the National Arena with tour ambassadors Dorinel Munteanu and Miodrag Belodedici.

The trophy will visit the most popular sites in each city, including the bridges featured in the UEFA EURO 2020 city logos. The award is now on its way to the following locations:

Volkswagen has designed a special ID.3 concept car to carry the prestigious trophy around the host cities, with the trophy placed in a glass showcase on the car’s top. Meanwhile, TikTok is allowing fans to take videos with the trophy and create their own personalised digital UEFA EURO 2020 experience.

The digital entertainment network is launching a video filter for the UEFA EURO 2020 Trophy, allowing fans to share their joy with friends and other football fans all over the world.

Some of the ambassadors have confirmed their participation in the tour, including Danish EURO winners Peter Schmeichel, Brian Laudrup, and Flemming Povlsen, 2008 runner-up Philipp Lahm, and former semi-finalist Wesley Sneijder. Skillzy, the UEFA EURO 2020 mascot, will also be in attendance, performing freestyle tricks.

In due course, the local organising bodies can provide more detail about their respective activities.

More information will be available on the UEFA EURO 2020 app, which gives fans unprecedented access to the tournament.

For fans, this includes regular tips, interactive charts, safety alerts, and the UEFA Festival schedule, as well as in-depth reporting, updates, and stats for each match and squad.

Games will be held in Amsterdam, Baku, Bucharest, Budapest, Copenhagen, Glasgow, London, Munich, Rome, Saint Petersburg, and Seville, with the tournament beginning on June 11 in the Italian capital and ending on July 11 in London.