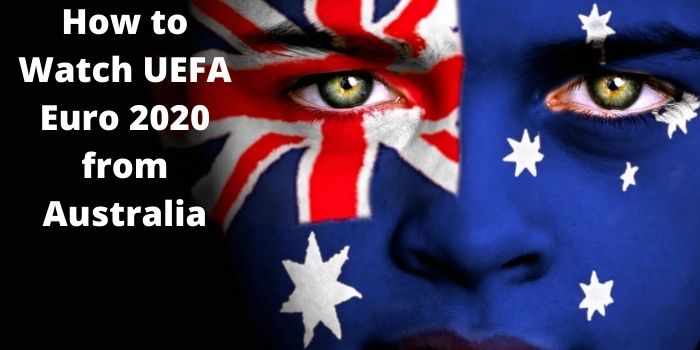 Before knowing the ways to watch UEFA Euro 2020 from Australia you must know that, football is considered the ‘World Game’, and for all football lovers around the world, the great action is around the corner. As the sixteenth UEFA Euro Championship 2020 is about to commence from 11 June 2021 and will continue till 11 July 2020.

Australia is also a sporting nation, and sports is considered a significant part of its culture. According to the latest study, Football is part of the topmost watched sports in Australia.

This article will discuss how to watch the second most famous and watched Football Tournament in the world, UEFA Euro 2020, from Australia by using both free and paid methods.

The UEFA Euro Championship has held every four years since 1960, except for 2020 as it was postponed due to the Covid-19 pandemic in Europe. It still retains the name UEFA 2020, where UEFA stands for Union for European Football Association. It is also informally known as the Euro.

This year, the authorities of the second most-watched football tournament, UEFA Euro 2020, has arranged various broadcasters around the world. Many channels have the Official Broadcasting Rights to live stream UEFA Euro Football Championship 2020. You can watch the live stream and on-demand matches of Euro 2020 through TV and web-based apps worldwide.

The following section will guide how to watch live streams of Euro 2020 matches from Australia, for Free.

Yes, it is possible to watch live broadcasting and highlight all 51 matches of UEFA Euro Championship for free on TV. We will guide you on how it is possible.

It is available on Apple TV, Fetch TV and Google Chromecast.

In Australia, different TV channels also provide live streaming on their online apps for free. Also, various paid websites that stream live and on-demand streaming of Euro 2020, provide free trials for limited periods (from seven to fourteen days). The following section will explain how to watch Euro 2020 Online from Australia.

Other than Optus Sports, Kayo Sports is also one of the best video streaming services that are available in Australia. It offers life and delayed on-demand stream of UEFA Euro 2020 from different channels including Fox Sports, ESPN, Bell Sports and Racing.com. Though its services are available after a paid subscription, it also provides a free 14-days trial service for new customers. So if you have internet, you can watch UEFA Euro 2020 from Kayo Sports by availing of its 14-days free trial services. In some areas, it may require VPN services to work hose further detail will be mention below. It also has further special features like picture in picture mode on screen.

It is available on both Android and Apple devices.

Though Optus TV is free to most of its customers for complete broadcasting of UEFA Euro 2020, it charges a little add-on service for its pre-paid customers. It has many different subscription options for its customers. The most economical way is to get all UEFA Euro 2020 is for $ 14.99/ month. It is available on Fetch TV Mini, and one can enjoy all 51 matches of UEFA Euro 2020 on Optus Sports TV for just $14.99 per month.

Following is the detail of how to watch UEFA Euro 2020 on online websites or apps.

The best video streaming app in Australia that offers unlimited access from various channels including ESPN and Bell Sports is Kayo Sports. For live and unlimited UEFA Euro 2020 it offers two subscriptions methods after the trial period, these are $25 per month for two screens and $35 / month for three screens. It provides HD quality live streaming with no ads and any time cancellation offer. In some region, it may require a VPN to access.

UEFA Euro on Radio from Australia

Most of the countries do no prefer to broadcast football matches on the Radio. As people love more to watch rather listen about Football on radios. But two countries still provide sports broadcast on Radio, so that their citizen can avail any chance to enjoy their favourite sport. Unfortunately, Australia is not one of them as Australian enjoy watching Football rather than listening. Although someone wants to enjoy Football on Radio, one can always use VPN to access the UEFA Euro 2020 Football broadcasting on Radio. The following section is about how to use VPN to access live and 24/7 streaming of Euro 2020.

If any area does not hold the broadcasting rights so one can use VPN to manipulate different sites to watch Euro 2020/21:

Firstly, purchase a membership with one of the VPN suppliers.

Though many people like to watch their favourite sport for free, the paid method is better than the open method.