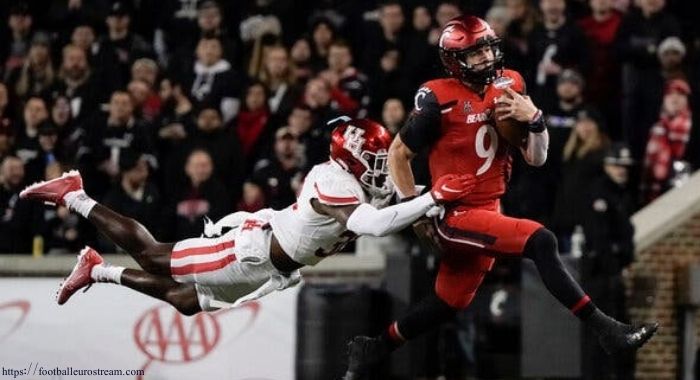 Watch College Football in Europe on BT Sports, Sling tv, ESPN & Fox. People do speculations and predict the future stars from college games. NCAAF carries on all over the year and product exceptional talent for NFL main stream teams.

For the US citizens there are plenty of options to watch the sport live. But if are outside US; somewhere in Europe, it may be a problem to watch the games. In this article, I will guide you how to watch the NCAA College Football in Europe.

In the UK, subscribing to BT Sport is the easiest way to watch American football. If you have BT Online, it can be included in your regular satellite subscription. BT Sport’s line of channels includes ESPN, which frequently broadcasts American football throughout the season.

For £10 a month, BT TV customers can add BT Sport, which offers a selection of the largest NCAA college football games on Saturdays. If you don’t want to enter into a full contract with BT TV, the BT Sport Monthly Pass is now available for £25 and gives you access to all the same channels you can watch on TV. PCs, laptops, and web browsers are not supported, but smartphones, tablets, consoles, and some streaming devices are supported.

You can wither go for BT Spots or you can directly get the ESPN Pass to stream live the college football games on your gadget.

If you are more than just a college fan, then ESPN Player may be for you. With the ESPN NCAA College Pass, you get access to all the games that ESPN is entitled to stream. And according to their website, that’s over 500+ per season. The monthly subscription starts at €22 per month and you can get a 7-day free trial here. The annual subscription also gives you access to the SEC network, ESPN U, and a number of additional benefits.  All you can get on ESPN is:

DAZN is the greatest option for watching NCAA College Football on Firestick if you are from Austria, Germany, or Switzerland. Every week, you get to watch at least three NCAA games.

If you resides in Germany, you can watch college football on ProSieben MAXX and ran.de

How to Watch College Football without Cable Anywhere in Europe

There are bundle of streaming services that you can subscribe in order to watch the college football anywhere in Europe:

Sling TV is the most convenient alternative if you don’t have cable and want to watch American football. Watch College Football Live on Sling TV at the best price with networks like ESPN, ESPN2, ESPN3, SEC Network, ACC Network, FOX, Big Ten Network and more. So you’ll be ready to watch the best college football games on schedule on Friday and Saturday nights.

Sling is one of the most economical way to watch almost every game. FOX, which hosts most of the NFC games, is FREE for Sling Blue subscribers in 14 of the 16 NFC markets. Local NBC channels are featured on Sling Blue in seven additional NFC markets (including all four NFC East markets). Sling Blue also includes the NFL Network, the exclusive home for Thursday night football matches.

Stream US College Football on fuboTV in Europe

fuboTv shares the entire schedule to stream the College Football anywhere in the world. It has affiliation with the channels that covers the college football.

You can select (on the official broadcast) the FBS Division 1-A league to see which fuboTV channels will broadcast games from this conference and how to get those channels. Additional games can be played on ESPN3. You will have access to ESPN3 if you subscribe to a package that includes ESPN. You can also watch live broadcasts of ABC events on ESPN3 if your local ABC network is not available on fuboTV.

DirecTV has 3 plans to offer for online streaming. You can’t access all NCAA games on a single plan. So, here is the brief of channels you can get access to on each plan:

The “Entertainment” package is the base plan for $69.99 per month and offers the following channels carrying college football:

Ultimate Plan: The “Ultimate” Plan will cost you for $94.99 per month, you add the following relevant college football channels:

You can unblock various NCAA Football Channels in Europe by subscribing to YoutubeTV. It will cost you 65$ per month. 10$ for 4k Streaming and 11$ for Sports Add-on (Next Level Sports, Fox College Sports)

You can access to following College Football channels on YoutubeTV:

Hulu + Live TV is supported by Roku, Fire TV, Apple TV, Chromecast, Xbox One, iOS, Android, and more. To determine if Hulu Live TV is right for you, read our review or sign up for a free week of service. Only Pac-12 Network, Longhorn Network, and Eleven Sports are not on their roster of university networks.