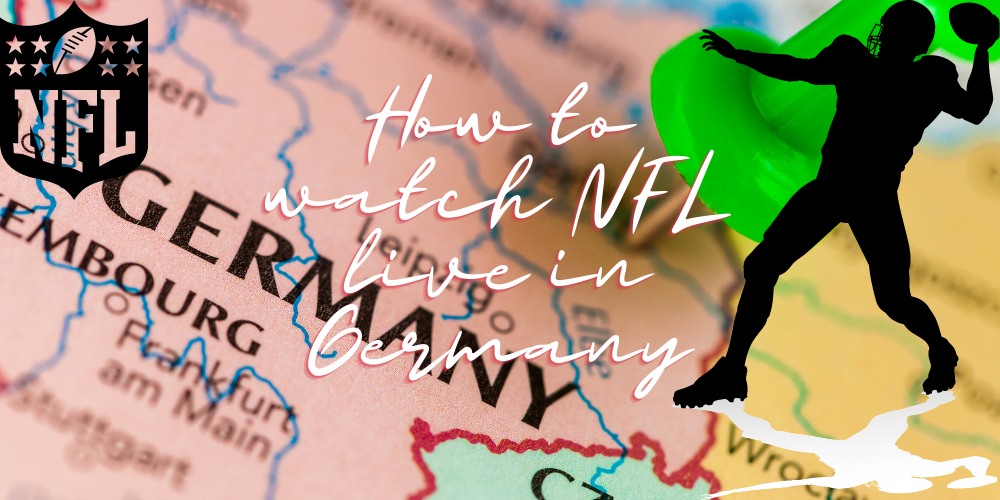 Germany being the seventh largest country in Europe is famous for so many things like its nightlife and its love for football. People in Germany love football and specifically watch American football league with zest just line Brazil and Maxico do.

How to watch NFL live streaming in Germany

When it comes to NFL, usually two major sources come to mind, first one is TV while the other one is online which means on your computers and smartphones. So, first of all, let’s discuss how to watch NFL on TV from Germany.

NFL live on TV from Germany

The following channels will be streaming NFL live in Germany this year.

However, at the same time ran.de streams another game. Moreover, if the NFL matches are being played in London then do not worry. All you need to do is to tune to ProSieben max as the NFL Marathon starts at 15:00 hours.

Moreover, the ProSieben has some football experts like Patrick, Jan Stecker and Esume who analyze the games in NFL season. However, since 2017 Sebastian Vollmer, who won Super Bowl twice, was working as an expert at ProSiebe.

So, since 2015 the coverage of NFL season on ProSieben has been expanding as it is a huge success each year. The interest of people force the authorities to make the streaming more and more well.

Furthermore, in addition to regular NFL season games, ProSieben will be broadcasting the playoffs as well. Super Bowl will also be streamed live right from the stadium as the channel’s team will be there on the spot.

Anyone living in Germany can watch the NFL on ProSieben and ProSieben MAXX through satellite or cable. So, now it is extremely easy to watch NFL matches live from Germany.

DAZN is another important channel that will be streaming NFL 2021 live matches this season. This channel allows its users to watch several games in a week. Like DAZN streams Sunday night, Monday night and Thursday night games. Moreover, it also streams a Sunday contest at 7 pm.

Moreover, the users can also watch NFL RedZone every Sunday during the NFL season. The starting time of RedZone at DAZN is 7 p.m. Through RedZone the viewers will be able to watch every touchdown. Moreover, big play from the Sunday games can also be streamed.

Furthermore, DAZN has other exciting things as well for the NFL fans. Like DAZN streams NFL Network live 24/7. The NFL network includes the streaming of NFL news, highlights and the complete coverage of the NFL Draft.

Unlike the previous channel DAZN is a paid source to watch NFL. However, it gives you a free trial as well in the beginning. These are the plans offered by DAZN:

However, to keep enjoying the services offered by DAZN you have to subscribe either to monthly or yearly plan.

DAZN’s monthly plan will cost you €11.99. You will enjoy 24/7 live streaming through DAZN. Which means you can watch all matches of NFL live through DAZN.

The DAZN’s annual plan costs €119.99. So, once you buy this plan you can stream all live coverages of DAZN all around the year.

How to Watch NFL Online from Germany

When it comes to NFL online streaming, the first source that comes to mind is NFL Game Pass. As NFL Game Pass is the official website hence the most reliable source to watch NFL matches live.

If you want to watch NFL pre-season, Super Bowl and all NFL matches live then NFL Game Pass is the best option to choose. It will also let you watch the recorded matches and highlights of matches as well. This will also help you watch NFL week’s games.

Only a small amount of content is available free on NFL game pass like ‘Sunday in 60’. Moreover, you can also watch the 5 minutes’ highlight of each match for free.

Apart from your television, DAZN is available on a number of devices like your smart phones and tablet. The packages will be same as discussed previously. You can either subscribe to monthly or annual plan to avail all of the services of DAZN. After subscribing to the desired plan you will be able to stream NFL live matches, NFL weekly games and NFL network 24/7.

How to watch NFL Super Bowl 2022 from Germany

The Super Bowl is being played on the very first Sunday of February and this has been happening since 2004. Moreover, the winning teams in the Super Bowl are awarded with a trophy named Vince Lombardi Trophy. This trophy is named after a coach who was the winner of first two super bowl games.

Following are the sources that will help you watch Super Bowl from Germany this year:

NFL Game Pass is the most reliable source to watch all NFL matches and events. However, you need to pay to avail these services. NFL Game Pass offers you a 7 days trial period but after that you have to choose from different plan discussed previously.

DAZN will also be streaming NFL Super Bowl this year. So, don’t be late in subscribing to DAZN. However, it is also a paid website and you can choose from the monthly and annual plans.

ProSieben is a free channel in Germany. Hence, you can enjoy Super Bowl on Germany’s free TV as well.

Use VPN to watch Super Bowl if you cannot get an access to any of the above mentioned sources. VPN will give you an access to all of the restricted sites.

How to watch NFL all Week Matches from Germany

As the name suggests the NFL pre-season is the season of games before the actual NFL season. Each year the off-record games are being played for the purpose of exhibition before the start of regular season.

If you want to watch NFL pre-season then these are the sources that may help you out!

NFL Game Pass and DAZN will be streaming NFL pre-season this year. However, both of them are the paid sources and all of necessary information regarding the packages is already given. But if you cannot get an access to these sources then use VPN to reach them.

Setting up VPN to watch NFL from Germany

So, if you cannot get an access to any of the above mentioned official sources then you can use VPN. VPN is the key to unlock all of the restricted programs, shows and channels.

Use of VPN to watch NFL live:

Here are some easy steps that will help you use VPN to get an access to all of the restricted sites to watch all events of NFL live:

Hence, all of the sources mentioned above will be the official broadcasters of NFL this season. You can visit either of these to watch NFL matches and all NFL events live from Germany. However, if you cannot access any of the official website or channel then VPN will be there to help you. It will give you access to all of the restricted websites in your area.