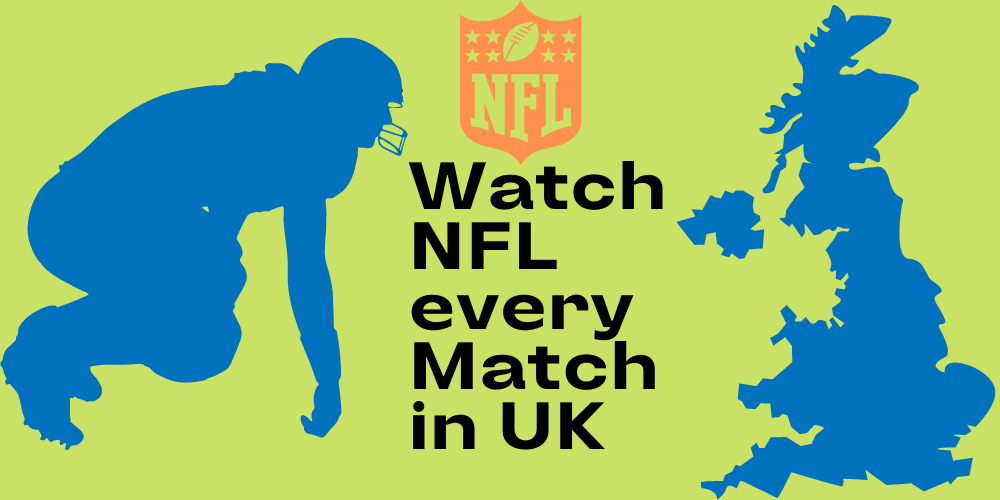 Although the UK is far from the USA, the passion for National Football in the League is no less there. Just as you can watch every NFL game from Brazil, Mexico, Germany, Australia, France, and the USA, the people of the United Kingdom can also own the right to watch the NFL games and six nations rugby as well.

In this article, I will easily guide you on how to watch NFL games in the UK. Be it is NFL preseason, NFL Week Games, NFL Pro Bowl, or NFL Super Bowl.

You can get to know the schedule and updates to watch live streaming or highlights from the UK. Moreover, it will also tell you about NFL games in pass the UK. And how you can watch sky sports.

How to watch NFL Live in the United Kingdom

Games might not be played in London this year. But still, the people from the UK can watch NFL live. There are two major sources to watch NFL live in the UK. The first is TV, while the other source for watching NFL is online.

Watch NFL all Matches on TV from the United Kingdom

However, there will be live streaming of a minimum of five games per week on Sky sports. The games that will be streamed live on Sky Sports are the following. However, this is not all; there will also be additional coverage of the NFL.

So, if you are a customer of Sky Q and you have a membership for Sky Sports as well then all you need is to switch the TV on and tune into the Sky NFL channel to watch the matches live. Moreover, note the above-mentioned schedule of matches to keep yourself updated with live streams.

However, you can also watch NFL live in the UK through Sky Go. Moreover, Sky has also given some other options to its customers who do not want to buy a satellite package.

Sky Sports has given other options to other people who want to watch the NFL super bowl live on other devices like smartphones and consoles. Sky Sports has launched Now TV to help people to watch NFL live in UK. However, Now TV is only accessible through a Sky Sports pass.

Different plans that you can buy to watch NFL live:

There are different plans that you can purchase to get a pass:

Like there is a one-day package that will be available for 24 hours only. This is known as a Day Pass, and you need to pay £9.99 to get one day Pass.

However, if you are a huge fan of the NFL and want to enjoy NFL live for more than a day, then a Month’s Pass will be suitable for you. You can easily purchase a month’s pass to enjoy many games. The rate of a month’s pass is £33.99.

However, you can also enjoy the sports for 12 months by purchasing 12 months offer. If you purchase a pass for 12 months, you will need to pay just £25 per month. Isn’t it a golden chance for the NFL fans!!

However, keep in mind if you want to enjoy NFL live in Full HD then you need to pay extra charges for that. This Full HD offer, known as TV Boost, will cost you just £3 per month. Moreover, you will not only get the chance to watch the NFL live in HD, but you will also be able to enjoy NFL in Dolby 5.1 surround sound.

But this offer is available only for a limited number of devices. You cannot watch NFL live on more than two devices simultaneously. But remember that it does not mean you can stream NFL on just two devices. You can sign in from different devices. But at one time you can use only two devices to watch the NFL live.

If you are from the UK and you have been a fan of NFL for a long, then you must remember watching games live on Channel 5. However, since 2009 Channel 5 was not streaming NFL live. But this year, you can watch NFL live on Channel 5 again.

So, if you do not want to spend your money purchasing plans from Sky Sports, then Channel 5 can be the best option for you as you can watch NFL free on channel 5.

However, Channel 5 will stream NFL on Monday nights. Moreover, you can also record the match and watch it later.

Channel 5 has introduced a social hour to watch NFL, known as NFL End Zone. This will be streamed on TV at 11:30 am on Sunday mornings. And you will enjoy it more as it will be presented by an American singer and actress, Corny Yarckin.

This year you can also watch the super bowl live on channel 5.

You can also watch the live streaming of every match on Now TV.

Watch NFL games live on GP, or you can record the games to watch later. You will get the NFL breaking news 24/7. Moreover, this channel will also present the game analysis of every match. Highlights will also be streamed on GP channel.

NFL game pass is an official website that will stream all NFL matches online. You need to sign up on this website to watch games lives, or you can also watch the highlights of the games. Moreover, the NFL game pass is available on several devices through a website and an official application.

Only a small amount of content is free on NFL game pass like ‘Sunday in 60’. Moreover, you can also watch the 5 minutes highlight of each match for free.

Watch NFL Live on Mobile Apps in the UK

NFL fantasy is the official application that allows you to watch NFL live from your cell phones.

This is another application that will help you to watch NFL RedZone live. You can use it on your mobile devices and your tablets as well.

Can’t watch NFL on TV or mobile application? Tune to BBC radio and enjoy live commentary of NFL on your way to home or office!

Sirius XM is your partner when there is no other way to watch NFL live.

To eliminate the blackouts, where most channels are not telecasting the streaming. Here we suggest the VON service for you to watch every NFL game without interruption.