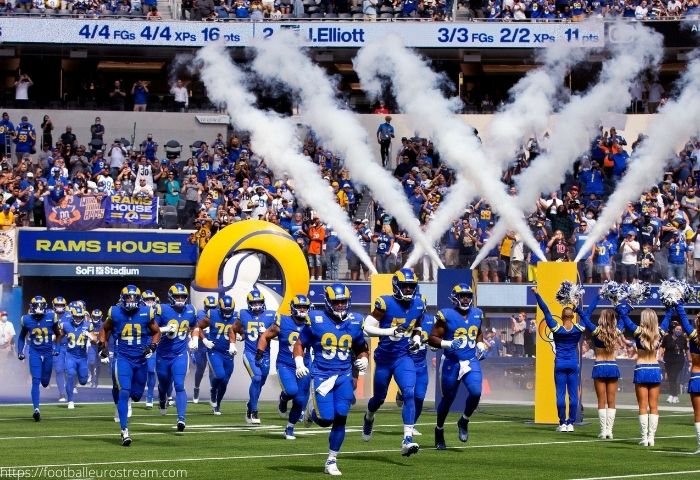 What Channel the Rams Game is Live On

The Rams compete in one of the most competitive divisions in football. This means that they will compete in many high-profile events this season. You will need a streaming provider that broadcasts ESPN, FOX, NBC, CBS, and the NFL Network to watch most of the games live.

How to Watch the LA Rams on Hulu + Live TV

You can watch all LA Rams games live on Hulu + Live TV. ESPN, CBS, FOX, NBC and NFL Network are available on the platform.

For $64.99 a month, Hulu combines live TV with a large selection of on-demand shows. They provide a 7-day free trial to assess whether you think the price is reasonable. If you choose to subscribe to Hulu + Live TV, you’ll get 50 hours of DVR storage and access to over 75 channels, including ABC, Animal Planet, Bravo, Discovery Channel, Food Network, HGTV, TLC, and others.

How to Watch the LA Rams on Sling TV

Sling TV may be the ideal option for you if you are looking for a low-cost solution to watch Rams games live. There are three options available, starting at $35 per month. At $50 per month, the Sling Orange + Blue is the best option for Rams fans, including more than 50 channels, including ESPN, FOX, NBC, and the NFL Network.

However, you will need to find other means to watch CBS games. Sling TV’s Sports Extra package includes the NFL Redzone channel for $11 per month. You get three streams, hundreds of on-demand content selections, and 50 hours of recording capacity with the platform.

How to Watch the LA Rams on YouTube TV

For Rams fans, YouTube TV is one of the best alternatives. It includes ESPN, NFL Network, CBS, FOX, and NBC, allowing you to watch every Los Angeles game live. If you lose one, you can record it and watch it later with the Unlimited DVR.

For $64.99, you get access to more than 85 channels, three broadcasts, and sports networks like NBA TV. During some special seasons, you can try it free for up to two weeks.

How to Watch the Los Angeles Rams on DirecTV Stream

The most expensive streaming option on our list is DirecTV Stream. ESPN, NBC, CBS, and FOX are available for $69.99 a month with the cheapest package. You won’t have access to the NFL Network, which means you can miss one of the most crucial games of the season.

With more than 65 accessible channels, the platform offers a wide range of entertainment. You can get HBO Max free for the first year if you upgrade to one of their more expensive packages. Instead of a free trial, DirecTV Stream offers a 14-day money-back guarantee.