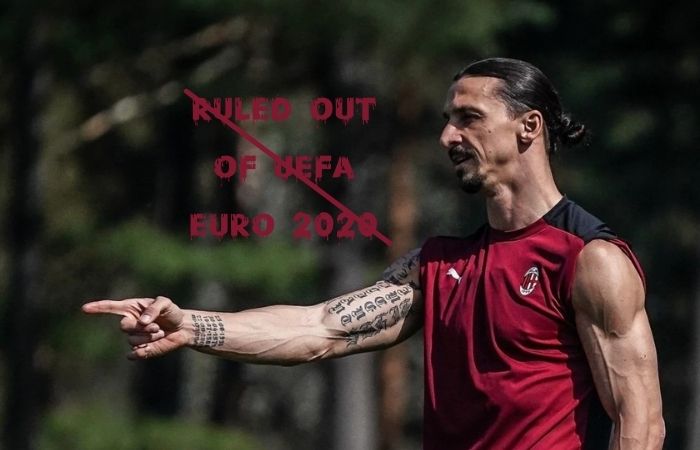 Yes, Zlatan Ibrahimovic ruled out of UEFA Euro 2020; shocked? He had a knee injury, that’s the reason only. Last weekend, Zlatan Ibrahimovic limped out of AC Milan’s 3-0 victory over Juventus, and the Sweden striker had further tests on his bruised left knee on Saturday.

Zlatan Ibrahimović ruled out of UEFA Euro due to knee Injury

The Swedish soccer federation announced on Saturday that Zlatan Ibrahimovic would miss the European Championship due to a knee injury.

Ibrahimovic limped out of AC Milan’s 3-0 victory over Juventus last weekend, and his bruised left knee was subjected to additional tests on Saturday.

Ibrahimovic would receive “conservative treatment for six weeks,” according to Milan, and the Swedish soccer federation revealed shortly after that the 39-year-old had informed the national coach that he will not be eligible for the tournament.

Zlatan has told Janne Andersson that his injury would prevent him from competing in the European Championships this summer, according to a tweet from the federation.

“Get pumped, Zlatan; we expect to see you back on the field soon!”

Ibrahimovic returned to international duty in March, five years after his last appearance for Sweden.

Euro 2020 begins on June 11 after being delayed a year due to the coronavirus pandemic.

Sweden’s first match is on June 14 against Spain(Watch Now). In Group E, it also faces Poland and Slovakia.

Ibrahimovic had told Andersson earlier on Saturday, according to Andersson.

In a quote, Andersson said, “Of course, it feels sad, particularly for Zlatan, but also for us.” “I hope he is able to return to the field as soon as possible.”